Sensibility, intuition, authenticity, are some of the words that define Mariana Cortes and her project Juana de Arco, a Palermo textile design brand that has already turned 20 years old and that captivated Japan.

Palermo reminded him of Arribeños, his hometown, with its low houses, and the place identical to her grandparents’ bakery. A neighborhood to ride a bicycle and walk in the open. Guided by her feeling Mariana gave birth to Joan of Arc in 1998.

A long history and a learning process that has strong ties with art.

In its beginnings, and for 12 years, Juana also worked as an art gallery. The first years in the basement of the store on Calle El Salvador exhibited works of small format by young artists. Later, Mariana conceived the Juana de Arco Casa de Arte project, and the exhibition space was moved a few blocks to a house on Costa Rica Street. «Affective aesthetics» «Regional articles», «Living» are the titles of some of the exhibitions. From these experiences, Mariana created an art collection with spontaneous gifts and exchanges with artists who asked her to exhibit in the place and, in exchange, leaving a work. Then she began to buy work more consciously, works that was linked with the aesthetic of Juana.

Laura Perez Campana, Dani Vega, Julian Teran, Flavia da Rhin, Fabiana Barreda, Tulio de Sagastizabal, Marcos Lopez, Pilar Cortes, Noelia Yagmourian, Nahuel Vecino, Leo Ciachio, Natalia March, Benito Laren, Nacho Iasparra are some of the artists that circulated in Juan. Juana harbored artists more or less consecrated with others, lived together like in a home. Many came from the inside. They lived in that house but they also launched into other projects, Juana was a springboard. There was freedom of movement, unlike what happens in other institutions.

Mariana is an artist who creates her prints and designs with a freshness more typical of autodidacticism than that of a graduate of the Design of Clothing career at the University of Buenos Aires (UBA).

«Dispassionate about fashion», as she defines herself, listening to what the women around her ask of her and listening to what is used on the street, Mariana designs her collections with great sensitivity. The nexus between art and design in Juana is very strong and this is perceived in each garment.

How do you create a collection?

I am the one that brings the art and the symbols of the collections, sometimes they are words, and all that goes together and I develop it. Many times I was inspired by travel. When I have already chosen a theme I begin the aesthetic, from drawings that I usually do [paintings on canvas or paper that are saved as works], and then the prototype is put together, at that moment there is another aesthetic turn. The prototype is the first model of each series, each collection today has 60 different prototypes. In Juana we make one of a kind, it is a unique production that does not repeat itself. In each collection you discover something new that is incorporated into the general concept, we refine what works and also bring new concepts that are incorporated.

When we began to make the shawl as pattern patterns, we made them big enough so that the picture does not fall in the same place and that makes each piece different. The serigraphy is an ancestral technique, it is manual and the color is also made by hand, then every day that is stamped is different. I created the silk screen workshop with a boy who wanted to work, I will do the first steps to see the imprint and then repeat the colors, we make different palettes, to which we put names: Andean palette has 5 colors, split palette is a classic of two colors, rainbow has 7 colors, it works as an internal code that we are applying.

What place has the spiritual in Juana?

Now my interest is in yoga, but yoga is not just practice, doing exercises, yoga is everything, it is also doing art, the practice of art. From last year we started to do poetry and yoga workshops, and I want to integrate that …

Juana is one between Japan and Argentina, that is a woman not thousands, it is Yoga Spirit, the spirit of yoga, the client of Juana is that, she likes art or makes art, she is an artist. The clothes are apt yoga. I always think that that is the client.

I want for the client to identify with something, all women are Juana, in each woman, there is a Juana. With something she will identify herself if she goes to Juana, there comes something from the infinity of color and the stamp.

Juana has something multicultural, there is a transversal connection, with India, Japan, Brazil, your trips, but also the Latin American…How do you see Juana’s connection with this, the local?

One of the first matches of Juana is the palette that is thought from Latin America, always the rectors of inspiration have to do with authentic costumes of the native towns, we are inspired by their embroideries, their colors. The idea from the beginning of Juana was that: the diversity, the mix, the patchwork, also of the feminine, of the aprons of the woman, of what there is and what is left over.

In my travels through Latin America I rescue things that call my attention to apply them and that translated into something newer. I digest it and I “enjuanizo” but always leave from there. When we started stamping the idea was to stamp the Latin American fabrics, the patterns were from aguayos, from barracan, I wanted it to be something faster and more usable but to keep that record. Make more “fast food” something that has other times. At the same time register it, do not miss it, preserve it. The ñanduti, is the greatest example; It is hidden in Paraguay and many people did not know. Give diffusion to these traditions and value them.

How was Juana’s connection with Japan? (Much of Juana’s production is exported to Japan)

Juana found a natural expansion towards Japan. The Japanese fell in love with the project. That detail, the unexpected chaotic that Juana has attracted attention. The Japanese have a lot of sensitivity, although it is a culture so different from ours. It makes them happy to wear Juana, they feel that it gives them happiness to wear these clothes, something energetic.

You breathe teamwork in Juana, how does it work?

Now I feel with many consolidated things that I do not want to touch, things that work alone. After 20 years there is a “juanero system” that is activated. The textile is developed inspired by a certain idea, each designer has her role and she is doing it. We are a true team.

In a team each one fulfills a function, a role. I am a village girl and there are things that I stayed at another frequency, things that I never knew or what I will know. When you assume that you are that, do not pretend otherwise and give a result. I am very delegate. When I started I was more controlling and distrustful and over time I was letting go and whatever happens. Sometimes the result is not what the mind was.

Another cute concept of Juana is that there are 20 hands, around 20 people who make each garment. I throw the first card, a recipe, this goes with this, but then the one who stitches it chooses the color of the thread or it cannot end as I wanted and finish it in another way. Maybe the one who stamped it did not find the rose that I told him, it was more fuchsia San Rita. There are things that vary. Then the garment comes and you have to clean it and take out the threads and it’s another person. Many people get involved in a single garment. Then it is left to chance, “the one of the kind” to be the infinite that is rotating, when the patch is cut, I give them a formula but the result I do not know, that’s very nice, that’s Juana. This is how it is given.

What is sustainability in Juana?

It is a company that survived three minimum crises, but we move forward. Juana is a survivor of all those Argentine crises. It is a self-managed project, familiar and without any support from abroad.

Juana came up from the idea of cutting, of using scraps. Doing bikinis at the beginning, I learned the small format. Later with the modal cuts that I had left over from the winter shirts I realized that I could make underwear, which was the first big success of Juana and was made with pieces. From the combination between the cut, the sustainable and the bikini, the idea of colored underwear was born. With the slogan «Dress your interior», look inside, that your underwear is colorful and beautiful even if you do not see it. From the beginning to all the clothes we work on the interiors, the patterned pockets, what is not in sight. From the cut of the underwear the necklaces were born, which are also filled with fluff also from the cut.

Another of the creations from the cut was the rag tied to make carpets that emerged in the 2001 crisis.

How was the project of the exhibition “Joan of Arc, 20 years old” born in the Museum of the History of Costume **?

With the move of the workshop, I tried to organize and clean, and I thought I had to donate that set of garments that we called the “Museum of Juana”, garments-rectors that I would never do again. I feel that Juana is a process, it was an apprenticeship, I feel self-taught in sewing, in the invention. I thought it was good to make a donation because Juana is very Argentine, it can not be done anywhere else in the world. I tried to reproduce it in other places, but it does not happen in another place, it is here and it is like that, it is what it is. Also in this way she supported the Costume Museum, enriching the collection with something more contemporary, which is part of a process by an Argentine designer. There was also the “magical bridge” for the 20 years a connection between Argentina and Japan, was exhibited in both places at the same time.

The current autumn-winter 2019 collection is called La Casa de la abuela, inspired by the house of her own grandmother Mariana conveys the idea that Juana is a livable and open space that is the home of the grandmother, a place of expression where We can all go, read poetry, expose, practice yoga. An art space worth traveling and discovering.

* The art collection of Mariana Cortes is part of an interesting publication about Argentine contemporary collecting. “Collectible affections” in Alemany, Eloise; Lamdany, Victoria. What surrounds us reflects us. Buenos Aires: Editions Larivière, 2008. 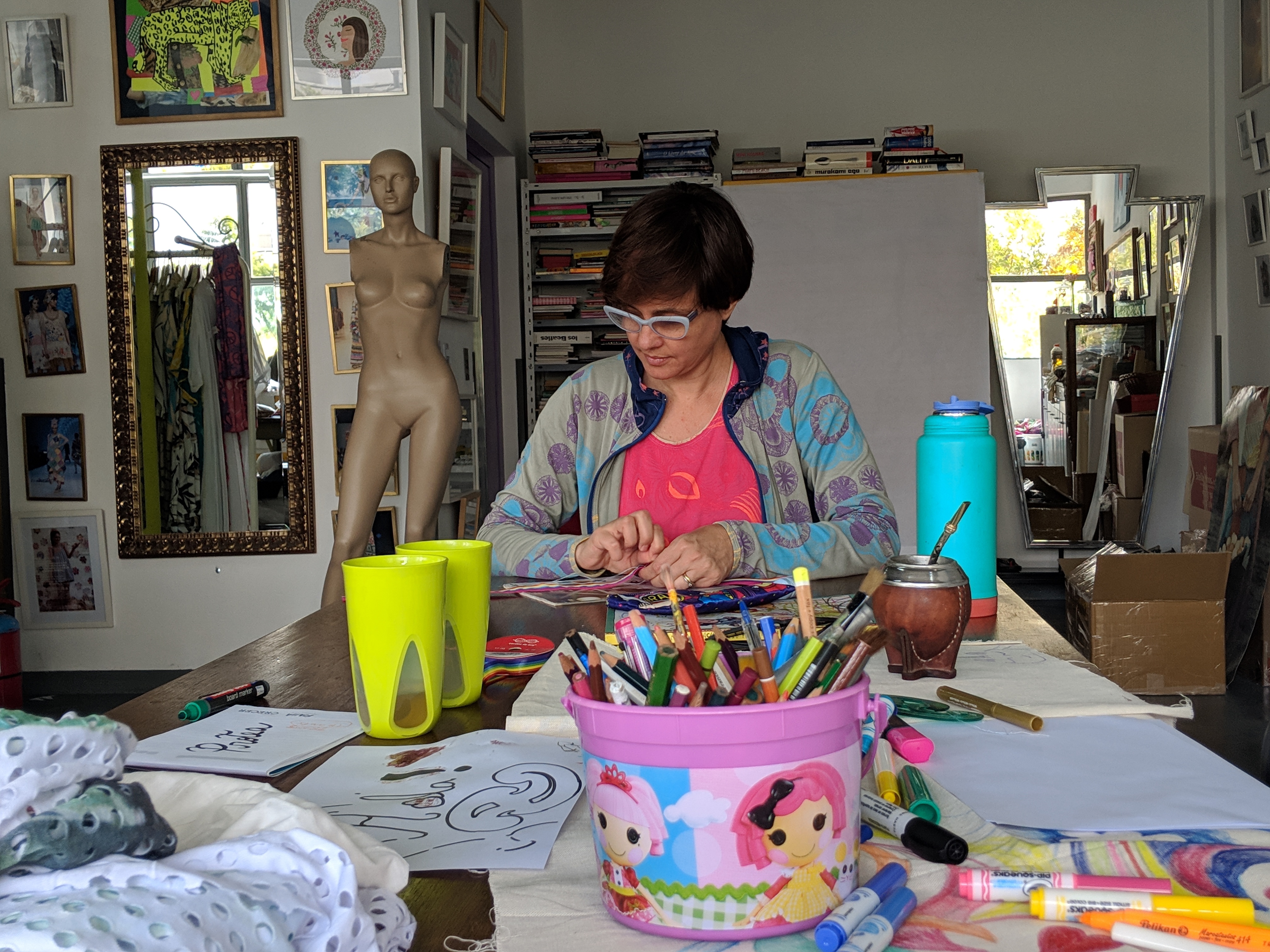 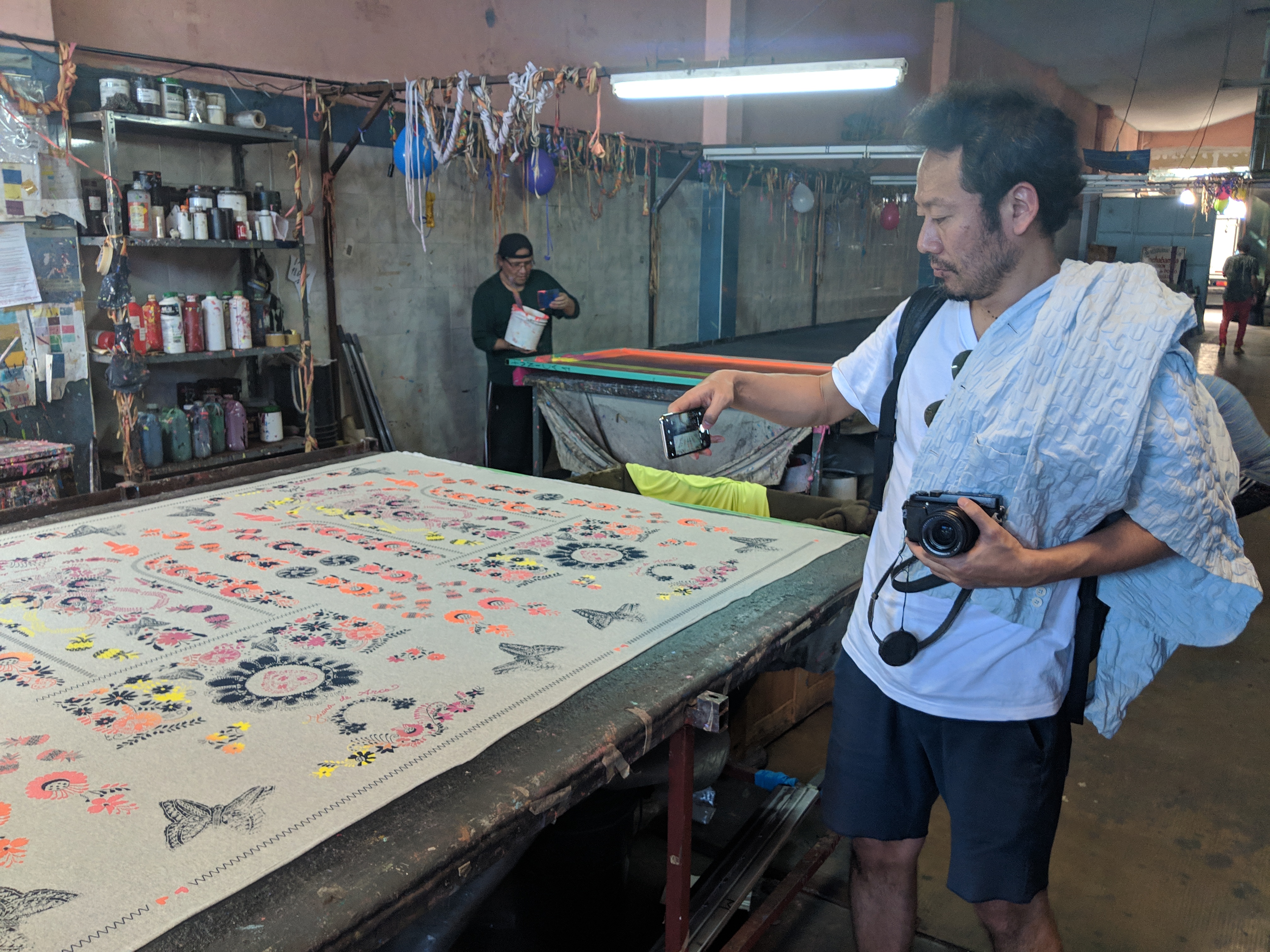 Next:
‍
« Carlos Alonso. Painting and memory » at the MNBA, Buenos Aires